We are a third generation professional association of trial lawyers whose concerns and reputations are distinguished by excellence and compassion. We recognize that our clients usually come to us after they have been intentionally or negligently wronged.

Sometimes the wrong is an unethical or fraudulent commercial activity by which an individual or corporation has taken unfair advantage of our client. Typically, the wrong is a serious or catastrophic personal injury or death with enormous personal and financial loss. We provide experience with an unwavering sense of right and wrong fortified with superior legal experience enabling us to bring justice against any company. The Gilbert Adams Law Firm stands committed to just resolutions so that our clients receive the maximum result to which they are legally entitled.

Our attorneys are sought-after speakers, authors, and teachers of trial advocacy and bar leaders. First and foremost, however, to each attorney’s professional life is the honorable and successful representation of those who have entrusted their rights to our care.

The firm traces its roots to1930, when Gilbert T. Adams returned to his hometown to establish his law practice in Beaumont. Adams was a trial lawyer and prominent legal figure throughout Texas for more than fifty years. He also was an international leader in securing and preserving human rights. He inspired and mentored many young lawyers, a number of whom joined him in the practice of law. Until his death in 1984, he was a state and national leader of the Bar by virtue of his trial and appellate advocacy, his vital leadership of the Jefferson County Bar Association, the Texas Bar, the Texas Trial Lawyers Association, the International Academy of Trial Lawyers, the Supreme Court Advisory Committee, and his work as a founder of the Association of Trial Lawyers of America, the world’s largest association of trial lawyers.

Upon graduating and receiving his Juris Doctor degree and his law license in 1968, Gilbert T. Adams, returned to Beaumont to join his father’s thriving practice. Since that time Adams has litigated numerous personal injury and commercial tort cases with multimillion-dollar verdicts and settlements, thus causing him to be recognized by his peers as president of the Texas Trial Lawyers Association, president of the Southeast Texas Trial Lawyers Association, member of the board of governors and executive committee of the Association of Trial Lawyers of America, member of the Supreme Court Advisory Committee, Advocate, American Board of Trial Advocates, and many other professional and community activities. 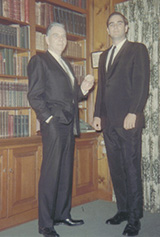 Upon receiving his law license, Gilbert T. Adams, III returned to Beaumont to join the firm. He quickly distinguished himself in litigating numerous substantial personal injury cases with multimillion-dollar results, thus causing him to be recognized by his peers in the Million-Dollar Advocates Forum, vice president of the Southeast Texas Trial Lawyers Association, member of the board of directors of the Texas Trail Lawyer Associates and frequent lecturer of trial advocacy across the nation.

Each personal injury and wrongful death case that our firm accepts involves extensive and detailed research. Our reputation for excellence and compassion is the result of dedicated accomplishments on behalf of our clients for more than seventy years.