Ways Insurers Can Be Liable for Bad Faith Insurance Practices 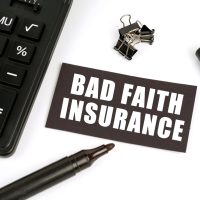 In Texas, there are two different rights of action for insurance bad faith: common law and statutory authority. “Common law” refers to a generally understood right of action deriving from historical case law; policyholders can sue when an insurer violates the implied covenant of good faith and fair dealing. Texas policyholders and third parties can also sue when an insurer violates Chapter 541 or Chapter 542 of the Texas Insurance Code.

Texas courts entertain a bad faith insurance claim when the insurance company denies a claim even though coverage was reasonably clear. The plaintiff must show the insurer knew or should have known there was no reasonable basis to deny the claim.

Insurance Bad Faith Under Chapters 541 and 542

Chapters 541 and 542 list out several specific forms of prohibited conduct. A bad faith claim may be premised upon how the insurer responds to the claim, how they make their coverage decision, how they negotiate the claim and communicate with interested parties, as well as how they pay a claim once coverage is decided. Prohibited conduct includes, but is not limited to:

Statutory bad faith claims can be brought by the policyholder as well as by other injured parties, such as policy beneficiaries. The injured must generally prove that the insurer committed one or more behaviors that constitute bad faith, and that the bad conduct was deliberate as opposed to the result of an error. If an administrative error or a mail carrier mistake caused a claim to be unreasonably delayed, for example, the insurer may not be liable for bad faith.

Insurers may be liable for a wide range of bad faith conduct that violates either the common law or the Insurance Code. Some examples of conduct that may give rise to a bad faith claim include:

Call Today if Your Texas Insurer Wrongfully Denied Your Claim

If your insurance claim was wrongfully denied or if you’ve otherwise been treated in bad faith by an insurance company in Texas, contact the seasoned and successful Beaumont bad faith insurance lawyers at the Gilbert Adams Law Offices for a free consultation on your case at 409-835-3000.